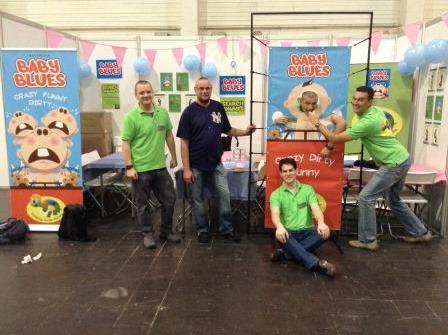 Poster by Tom at 12-10-2015
We have just experienced 4 unforgettable days during our debut in Essen. On thursday we just fell out of the top-10 at the geekbuzz and we didn't even notice this during the day. But what we noticed was our booth was always completely crowded. Many had doubts about sitting at a table filled with crying babies, but once they sat down most of them had lots of fun and almost everybody who played the game bought a copy. It was a real treat to see so many enthousiastic gamers at our tables and this was probably also the reason of our succes. If you see other people having so much fun, wouldn't you want to join? As a result our tables were filled the entire fair and unfortunately we had to disappoint a lot of people because there wasn't any seat available.

I'm convinced that the main reason we could have such succesful days is caused by the great ambiance at our booth, both from the players as from our demo team. This is why we want to thank all the players and also our motivated demo team (that had a lot less spare time at the fair as we promised them, but they didn't complain a second). We had some very busy days, but it was lots of fun!

So what I am trying to say is. Thanks you, thank you, thank you to all players, the demo team, voters at the Geekbuzz, the people who supported us from home. Thank you for our succesful debut, I don't know we could copy the succes in the future, but I surely hope we can. See you next year!