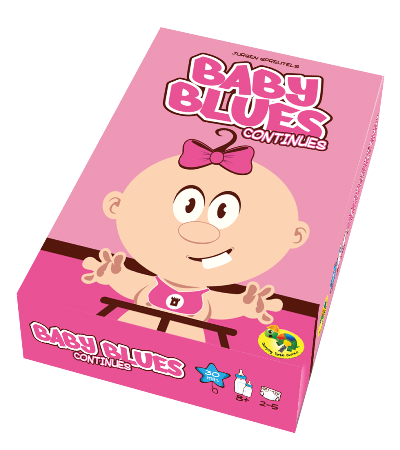 Poster by Tom at 2-6-2016
When we launched Baby Blues our first dream was realised, a game we published on our own. We dreamed of players who would have as much fun as we did with our new baby game. The enthusiastic reactions at the Essen launch en the many interested license partners gave us the confidence and the energy to keep on with the brainstorm to make the game even better.

This is why, thanks to your support, we now announce there will be an expansion of Baby Blues together with a new printrun of the base game!

The expansion will be called Baby Blues Continues and will be ready at Spiel in Essen.

The expansion will be split up in different parts that can be combined or that can be used together.

We'll add cards for a fifth player, so Baby Blues will be a 2 to 5 player game.

When you play the original game with 2 players, there are 2 adjustments compared to the normal game. First of all you can't trade and secondly the points on the back of the cards are irrelevant. With the variant this won't be the case anymore. First of all a card could be drawn for kids that are collected by the parents. As soon as 3 such cards show up the game is over and the players count the points. Secondly there will be a closet. Every turn you can swap a card in your hand with a card in the closet. But be aware, your opponent could lock the closet so you can't use it for a few rounds. Also the contents of the closet can be reset by certain action cards. Because you can swap cards, but you don't know what will turn up, we believe the feeling of the base game is also present in a 2 player game.

3) A new type of card: the action card

We added a new type of card to the game. In your turn you can play the same cards as in the base game, but in addition you can play as many action cards as you want. With these cards you can for example transfer problems (red cards) to other babies or trade babies with an opponent. We would love your feedback, but we experienced the game will become a little bit more meaner and also more tactical.

4) A new problem: the nauseous baby

What will happen with a baby if you give him too much pie at a birthday party? He will become nauseous and this problem will only be solved when he vomits. The owner of the baby can choose the direction and the baby to his left or right will start crying immediately. Luckily there is a medicin available, but will you be able to give it to the baby in time?