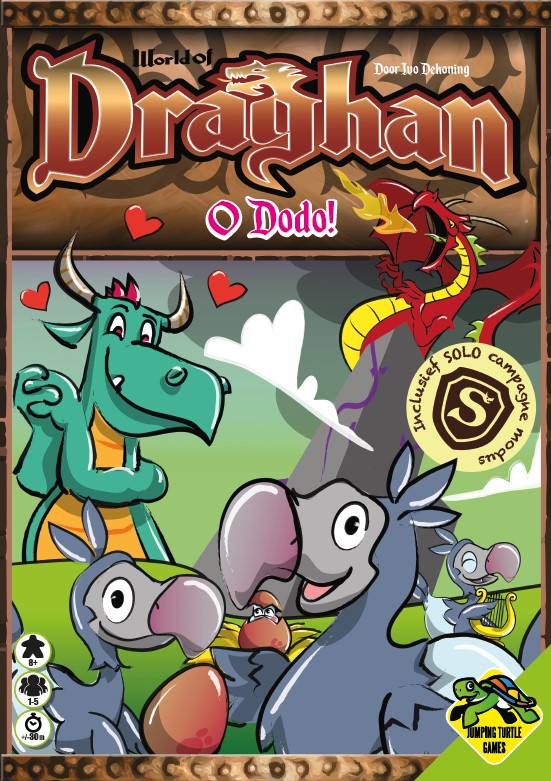 Poster by Tom at 29-9-2022
O Dodo is the thirth title in the World of Draghan series after Once Upon A Dragon and Sneaky Ol Dragons.

Once upon a time dodos were living carefree in the realm of Draghan. Especially the little dragons saw the funny birds as cuties, but everything changed when the Dutchmen arrived. With their ships they brought many animals that neither the dragons nor the dodos had set their eyes on before: rats, dogs, pigs... All these creatures hunted the dodos and ransacked their eggs. Unworldly and peaceful in mind, the dodos hadn’t been able to stand their ground against these reckless invaders. Can you help the dodos to hatch as many eggs as possible and save them from extinction?

'O Dodo!' is a push your luck game in which you must constantly choose between low risk and high reward. During your turn you alternate in playing a card from your hand and a blind card from the draw pile. You add the cards to one of the nests and the value of the cards you play must go higher and higher. Make the nests as big as you can, so you can hatch as many eggs as possible at the end of your turn. But also know when to stop. When the card you draw from the draw pile is too low or when your hand is empty and you can't hatch the eggs in one of the nests your turn is over and you’ll see another player profit of your hard work.

Thanks to the many included variants, the dodos continue to surprise and challenge you even after a long time. A few of the included variants:
- Add ruse cards that will activate a special effect.
- Gather the loot so you can return cards from the discard pile to your hand.
- Add effects to the nests that you can use once during your turn to activate a special effect.
- ...

The game also includes a solo variant and a solo campaign where you have to earn enough points each game to buy a ruse card that you can use from the next game on. The more ruse cards you buy the more chances you have to increase your score. Try to unlock them all and go for the magical score of 100 points to save the dodos from extinction!